We Are In For a Thermal Maximum

- You have coined a new and relevant term, Eco sapiens (environmentally rational man). What does this concept imply?

It is obvious that Homo consumers is bringing the planet to its knees without even realizing it. People today seem to becoming increasingly asinine, I would even go so far as to say that 80-85 percent of them are oligophrenic. This is a wonderful word, but what does it mean… I was recently sent a link to a fragment of Vladimir Soloviev’s program on the environment. I commented on it, but then I began receiving links to other programs. Every media organization seems to have banded together to shout down Greta Thurnberg. They are accusing her of corrupt practices, of being a protégé of Rothschild or Soros, and saying that this sick girl (I think she is very talented) is being manipulated by big capital in its own interests. Yes, a billionaire did provide Greta with his zero-emissions yacht for crossing the Atlantic. But how is that going to make him money? I myself have financially supported volunteers on the Volga without any thought of making profit.

What profit do I gain, for example, from personally financing trips for environmentally active children to attend an international forum in Spain? My only hope is that these children will be able to change the future and create a different world with a new environmental culture and worldview. While public figures might say that I have some business interest in this.

The planet is perishing because of people who see only the financial side of everything and accuse environmentalists of selfishness and the desire to earn money. They are merely gullible, short-sighted and uneducated people, whereas although Greta has been slandered by haters, she is now a symbol of the environmental movement throughout the world.

The natural environment must be saved! I have been financing tests for obtaining methane from the intestines of bovine cattle and pigs and have offered the world community free use of this technology. Bovine cattle produce methane from their mouths and rectum ampulla. This methane can be collected and used as an energy resource. Or here is another suggestion. You could independently, or along with your neighbors, collect samples of tap water and bottled water bought in the nearest store and take them to a chemical laboratory at a higher educational institute for testing. This kind of test is readily available and does not cost that much. But the more people you invite to participate in this experiment, the greater will be the response (and the cheaper the laboratory services, five euro per family). And you will be surprised to find that the tap water will be no worse than the bottled water from the store, and it might even be better. Where do you think companies get the water they pour into bottles? Very possibly from the same water taps…

What financial interest am I pursuing by adhering to the worldview of Eco sapiens? I insistently recommend that you not buy water in the store, particularly in plastic bottles—when stored in plastic water loses its beneficial properties. Do not add to the vast areas of plastic waste stretching for hundreds of thousands of square kilometers in the World Ocean. See for yourselves that drinking tap water is no worse than drinking bottled water, and use it. This will be your small, but very important step toward saving the planet.

If you want to do more to help, buy fewer clothes, particularly colored clothing, do not follow the latest fashion trends. The textile industry is the second largest environmental polluter after agriculture. It consumes an enormous amount of natural resources—water, oil, soil, plants and animals—and also uses toxic chemicals. Rivers, ground water and the soil suffer from the manufacture of clothing; it also creates greenhouse gases. Almost 80 billion pieces of clothing are manufactured every year in the world, but almost every second item is not sold simply because it doesn’t have a buyer. According to research data, 20 tonnes of textile are burned every second and, during the combustion process, 1.5 billion tonnes of greenhouse gases are discharged into the atmosphere.

Take a look at television anchormen. They are always dressed in bright, vibrant and flamboyant clothing, which incites television viewers to follow suit. For example, Yevgeni Popov often appears on the 60 Minutes program in red trousers. Eco sapiens must react to such things! Let’s call Popov an environmental violator. But this is not only Russia’s problem, there are consumption inciters in every country—television anchormen, fashion models, popular singers and musicians, actors. This is a global phenomenon.

Super consumption is now the mark of a “successful” life. How is it that everything that degrades the natural environment has been elevated to a cult and become an object of pride? Owning a car (preferably a prestigious one) and a big apartment or house, keeping up with the latest fashion, possessing jewelry and furs, taking regular trips to exotic places, and most certainly by plane, without worrying about the carbon footprint left by aviation and so on are just a few cases in point. The Earth’s resources are not boundless, nor is its capacity to regulate the biosystem. Either we shift our worldview from Homo consumers to Eco sapiens, or we will perish as a species. And planet Earth will become planet Water.

Environmental problems cannot be dealt with by one country alone, that would be politically detrimental to any state carrying out environmental reforms. The introduction of new civilizational standards for manufacture and consumption will bring about a reduction in economic growth. The participants in environmental reforms must operate on equal conditions.

Environmental problems can only be dealt with on a planetary scale. For example, the world’s largest forested areas are concentrated in Russia (22%), Brazil (16%) and Canada (7%). Forests play an enormous role in forming the climate all over the world. This means that all the countries of the planet should take part in protecting and restoring the forests in Russia, or in Brazil, and in putting out the fires. Money from a new special planetary fund will be used to resolve these and other environmental problems. Countries will make contributions to this fund depending on their economic conditions. America, China and Japan should make larger contributions, while the African countries can be expected to contribute less.

When discussing environmental problems, television anchormen, for example, Vladimir Soloviev, Irada Zeinalova, Artem Sheynin, Anna Shafran (Palukh), and others, refer to certain scientists who claim there is no global warming. So give us the names of these scientists! Society needs to know those who are under a delusion and imposing their delusion on others. These things need to be discussed among professionals and academic people, and not television talking heads. The academies of sciences of all the countries of the world (including Russia) claim that humanity is having a dangerous anthropogenic effect on the environment, which is leading to a rise in temperature and other negative consequences.

Over the past 800,000 years, the level of CO2 in the atmosphere has reached a record high. If the level of carbon dioxide in the air reaches 1,200-1,300 parts per million by the end of the 21st century and the temperature rises by another 2 degrees, the temperature of the World Ocean will increase to 21-22 degrees and of the North Arctic Sea to 9-10 degrees. These temperature changes will lead to another discharge of hundreds of billions of tonnes of methane from the World Ocean, as well as from the melting permafrost zone in the Polar regions (Alaska, Canada, Greenland and Russia), which will produce around a trillion tonnes of methane. There will be a thermal peak, which will cause a planetary fire. The last time this happened was in the late Paleocene Age, which led to the significant extinction of all living organisms for more than 100,000 years.

Not many people know that natural combustion of methane also occurs in the Black Sea. In 1927, in the Sevastopol region, the height of the flame of burning methane discharged by an underwater earthquake reached 500 meters, while the fire covered an area of 7 km. So we are playing with fire in the direct sense of the word.

- Another of your projects, EuRICAA, has gained world renown. How are these two initiatives aligned? Will the Hamburg Club help real improvement of the Earth’s biosphere and begin that worldview revolution you write about in your novel Solo Mono?

EuRICAA, which stands for Europe, Russia, India, China, America, Africa), is the first project to publish and offer new civilizational environmental standards for discussion. They apply to all spheres of the economy and people’s everyday life. Incidentally, some of them are already being implemented locally. One of the points addressed in this project is replacing eating utensils and dishes with items made from food products. For examples, knives and forks can be made from rice, wheat or sorghum, teaspoons from caramel and chocolate, cups from dried fruit, and plates from bran, cheese, corn or potatoes. There are also other possibilities; modern technology makes it possible to do this at a high level, although not on a mass scale. At the end of the meal, the dishes and utensils are eaten, thus reducing the use of detergents and decreasing the processing of wastes. But most important, it reduces the use of water. Humanity uses as much water every year as is contained in Lake Geneva, and as much in eighteen months as is contained in the Azov Sea!

Both the EuRICAA project and the novel Solo Mono talk about what humanity must strive for in this respect—to become Homo cosmicus and go beyond the bounds of the Earth and even our immediate galaxy. Our planet will be able to provide resources to maintain up to 5 billion Eco sapiens; we need to think about humanity’s future in global terms.

It is impossible to survive in the environmental conditions we are currently living in. If you compare analyses of human feces in 1980 with those of the present day, you will see that the human body is turning into a sintering factory. According to the data of a German state laboratory, lead, aluminum, copper, selenium, molybdenum, chromium, nickel, cobalt and other metals can be found in human feces.

If television anchormen are saying that the environmental movement is a way to earn money, I can say that perhaps they are denying global warming and humanity’s anthropogenic influence on the environment because they have plans to extract metals from either own cesspits and sell them on the market (see the table of the German state laboratory to find out the metals present in the feces of Homo consumers). 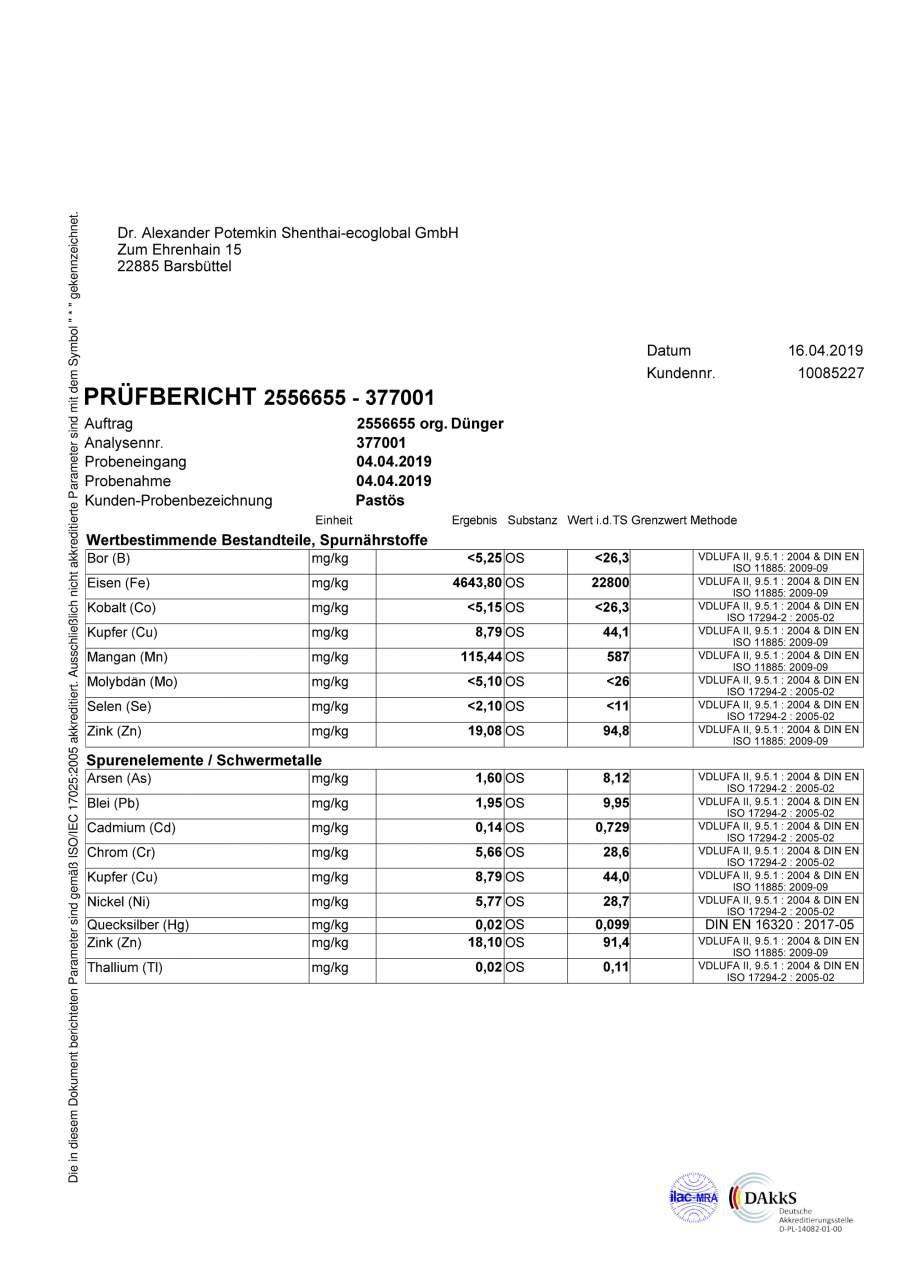 Recently, researchers from the German Federal Environmental Protection Department and Robert Koch Institute discovered that there is plastic in the bodies of most children. Traces of 11 types of plastic were found in 97% of those tested. They get into children’s bodies from packaged products, toys and water in plastic bottles.

Oncological diseases currently rank second after cardiovascular diseases as causes of death, with a clear upward trend, including among children. The World Health Organization states that the number of cancer cases will grow in the next 20 years by 70%. Every fifth man and every sixth woman suffers from cancer at some stage in their lives.

Incidentally, I have six children myself and we are considering a seventh… But what kind of future will we leave our children if the current environmental situation is having such a horrendous effect on the gene pool and fertility. Humans are losing their capacity to progenate. The despoiled environment is also affecting the ability of Homo consumers to enjoy sexual gratification. So today’s pharmacological industry is putting thousands of tons of stimulators on the market to enhance the sex life of men and women.