Russian people appeared to be in the midst of a hybrid war. A full destruction of territories inhabited by Russians is one of the goals. Massive extermination of mineral resources, deforestation and arson are proved to be war technologies.

If there is a Hell on Earth, it is in Siberia. Devastating wildfires which roared across Siberia in summer 2019 prompt us to speak out about a man-made disaster. To be specific, wildfires started in the Far East in spring and spread over Irkutsk region, Krasnoyarsk region, two districts of Buryat Republic and one district of Yakutia, where the state of emergency was declared in early July. Forests were burning throughout the whole month. According to the EMERCOM’s release, as of July 30, a total of 3.5 million ha of Siberian and Far East woodlands were engulfed in fire continuing to spread. Heavy smoke shrouded major cities such as Barnaul, Tomsk and Novosibirsk, and later moved to Kemerovo and Kazakhstan. Residents of many adjacent regions suffer from breathing difficulty and persistent smell of burning, so they have to wear respiratory masks.

A pitiful 10 percent of forest fires are ruled to be suppressed. EMERCOM in Krasnoyarsk had not used aerial firefighting until July 31. The Ministry of Natural Resources has recently introduced the following standard: as long as fire extinguishing costs exceed potential losses, no fire suppression can be undertaken. So called "control zones" have been introduced to represent wildfire areas exempted from fire fighting, which allows regional authorities, who solely define those areas, to save significantly. Satellite images are grossly inadequate when it comes to wildfire management. It is a weird country driven by even more weird law making!

Officials tend to estimate wildfire damage in cubic meters and none of them know how much oxygen humanity has lost. They are ignorant of the fact that one mature tree can produce enough oxygen for 3 people to breath, whereas a single hectare can absorb 120-280 KG of CO2 and produce 180-200 KG of oxygen. It seems that Russian authorities see no value in oxygen at all. According to the Krasnoyarsk region Governor Aleksandr Uss, who reported during public speaking at Youth Forum Birusa-2019, wildfires are a “common natural phenomenon that is meaningless to fight with, and, indeed, sometimes even harmful”. He has astonished the public by saying “Now, if a snowstorm occurs in winter . . . it does not occur to anyone to melt icebergs so that we have a warmer weather.” It seems imbeciles in the governor's team and their undermining practices are exactly what their overseas masters need when seeking to maximize harm to Russia.

As known, Governor Uss is a multimillionaire who has generated his wealth via deforestation of Siberia as did many other “prosperous” officials.

New videos revealing forest arsons have shown up on the Internet, so it would be too shallow to blame those huge fires on careless backcountry campers alone. Most probably, the arsons are committed by the Russian special groups directed by the high and mighties to conceal timber thefts and to trade low cost charred wood illegally. Unfortunately, these greedy criminals are still out of prison.

Tatiana Davydenko, Ex-Chairperson of the Krasnoyarsk region Accounts Chamber claimed recently that it might be due to somebody’s vested interests that the fires were not suppressed. She believes that “there are two main reasons behind the wildfires. First, negligence of Governor of Krasnoyarsk region, Head of the Government and Minister of Forestry (Aleksandr Uss, Yuriy Lapshin and Dmitriy Maslodudov respectively). Then one must understand that if the wildfires are not extinguished, this is due to somebody’s criminal interests”. She also added “what is going on is a crime. It is a crime not against the forest or natural resources alone. It is a crime against people, against all of us. How much longer is it going to last? When will it be stopped? We warned about the wildfires in December and submitted instructions, reports and analytical notes to legal authorities. Nothing came of it, which means that somebody’s making advantage of the situation”.

In her earlier interview she stated that 48 billion rubles worth timber left the region in 2018 with hefty 70 percent of the exports ended up in China, whereas tax revenue related to that amounted to merely 1.6 billion rubles. In her view, audit results clearly indicate that regional office fails the firefighting. The audit also showed 4 billion rubles in damage. After all, they never listened to her, and eventually she was fired. Regretfully, Russian Prosecutor’s Office does not seem to have any interest in investigating those cases.

At the same time, Aban District Prosecutor’s Office in Krasnoyarsk region found 130 ha deforestation area which was claimed to had been prior destroyed by fire. No wonder Siberian taiga is engulfed in flames.

“Wildfires are merely a crime, not a catastrophe” says Pavel Pashkov, environmental activist and forest defender, proving arsons in his petition “Russian Taiga on the Verge of Destruction” .

Scientific estimates show that the high-intensity fires could have been prevented. Improper administration, unfair and incompetent management caused disastrous wildfire impact, thereby 11 million ha of the Russian taiga have already been burnt out.

Floods and wildfires are of the same origin. They are caused by global warming which, in its turn, is associated with freeloading humanity is practising.

Still, there are some profound officials among the general shallowness of the government. The Deputy of Krasnoyarsk region Ivan Serebryakov addressed people “Putting a price tag on something as vital for biosphere as forests is far beyond the boundaries of cynicism, where the rationale for choking people with smoke hides. How can fresh air be priced then?”. Serebryakov should be appointed Governor instead Uss, or we all can die from oxygen deficiency.

What is more, Chinese trace is clearly seen in Siberian wildfires. In recent years illegal deforestation done by the Chinese has gained unprecedented pace - up to 80 percent of timber is exported to China whereas forest clearance gives a green light to the Chinese farmers. Siberia has made a huge leap forward in sinicization over the last decade. In the game of politics the stakes are as high as Siberia and the Far East. It is evident that in Siberian wildfires commercial interest goes next to the political put-up job aimed at cleaning Russians out of their lands. At the end of the day, some will die of forest fires, and some will give up on their homeland and leave.

The State Duma proved to be the true firestarter after they approved the Forest Code that came into effect on January 1, 2007. Shortly after the forestry was handed over to ‘efficient private owner’, more than 200,000 foresters were dismissed from their jobs, the forest protection and management services were destroyed along with airborne surveillance and aerial firefighting squadrons. Nobody is there to pick up an emergency call.

Forest protection assets inherited from the USSR has degraded to the point where nothing seems left but cipher. As a matter of fact, there is no money in Russia except in the bank accounts of Russian billionaires. A single firefighting aircraft was produced to cover the vast area of Russia, which is another proof of the Russian forest being sentenced to death. Those who tolerate this government, never mind vote for it, are partners in crime.

There has been a Cross Processions practiced by EMERCOM officers as an alternative way to fight fires in Siberia. Those were endorsed by the regional authorities of Novosibirsk and Krasnoyarsk Orthodox Episcopates. Also, shamans had their special get-together on the subject. In the 21st century it’s not all right to have it anywhere, but it’s just fine in Russia.

Lately, it seems that the whole planet is on fire - the US, Greece, Israel… President Putin never hesitates to offer them help while Siberia is somehow always missed. Actually, both Putin and Prime Minister Medvedev are quite secretive when it comes to Siberian wildfires, and why shouldn’t we get suspicious about it? Have they been ordered to burn the forest down? And who gave the order? Surely, oligarchs have done that to squeeze Russia out to the very last drop.

The burning taiga is a devastation of ecosystems including millions of plant and animal species, microorganisms irretrievably lost in fires, which can lead to destruction of biotic structures worldwide. Specifically for the Slavic people this would mean that their gods have left the sacred taiga.

Siberian large-scale  wildfires is actual malice against the whole of mankind. Hollywood actor Leonardo DiCaprio, well-known environmental activist and philanthropist, posted a video to his Instagram claiming to bring attention to Siberian wildfires. He reposted The Guardian story telling that the fire smoke is seen from space.

As per World Meteorological Organization, Siberian wildfires have emitted as much carbon dioxide as the whole Sweden emits a year. Today’s level of CO2 in the atmosphere is 413 ppm  (excluding CO2 emitted in Siberian wildfires), whereas predicted safe level is 426 ppm. Nowadays, carbon dioxide growth rate is really disturbing. As recently as a hundred years ago it was just above 300 ppm, while in January 2016 it came up to 403 ppm, followed by 409 ppm in January 2019.  That is to say, the CO2 level has increased by 6 ppm over the last three years and by 4 ppm over the past six months only. Сonsequently, it’ll take a year or two to reach a lethal dose. Along with the increase of CO2 proportion, the atmospheric oxygen level decreases causing deaths of living organisms.

Inhaling higher concentrations of CO2 overacidifies our bodies and triggers diseases that can’t be cured by healthy living and food. A rise in concentration of this acid in the blood causes chemical degradation that impacts intellectual abilities.

Meanwhile, it seems that CO2 has already influenced the greater part of people of the Russian Federation. They are entirely taken up with their garden beds and stubbornly refuse to comprehend deadly effects of wildfires.

Eventually, it makes no difference how wealthy you are or  how many children you have as all of them can die over the next while. There is no more point in economic or demographic superiority, as well as geopolitical dominance over other countries and nations. Notion of Chinese invasion of Siberia becomes absurd after the global surge of mortality fuelled by growth of CO2 emissions and decline of oxygen.

The Earth will destroy imbecilic sinful greedy humans if they can’t get rid of oligarchic capitalism incompatible with life itself. 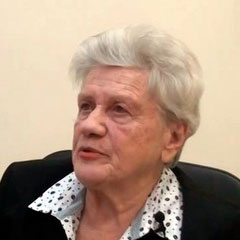 Doctor of physical and mathematical Sciences